Our Cinnamon Roll Baked Oatmeal recipe is an attempt at compromise. All of the flavour of a cinnamon roll done as a baked porridge with a bit of icing on top to be just a little sinful. They work best from a muffin tin so that you can see the icing and also control the portion.

Often I have to fly into Chicago O’Hare airport and British Airways always seems to land at the gates where there is a Cinnabon pumping sweet, sugar, flour and butter smells into the corridor. As much as I wish every day could start with a cup of black tea and a cinnamon roll, it is no more likely than ice cream for dinner. Cinnamon Roll Baked Oatmeal helps me beat my Cinnabon cravings!

Try blueberry baked oats with coconut, pecans, Greek yogurt and maple syrup or our make ahead baked oatmeal cups. If you are an oats super fan, our best granola recipe is for you! Sprinkle on yogurt, fresh fruit or even salads for a sweet and savoury combo. 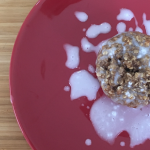 As much as I wish every day could start with a cup of black tea and a cinnamon roll, it is no more likely than ice cream for dinner. Cinnamon Roll Oatmeal is an attempt at compromise.
CourseBreakfast & Brunch
CuisineAmerican, British
Prep Time10 minutes
Cook Time20 minutes
Total Time30 minutes
Servings6 muffins

Baked Oats are a speedy mid-week breakfast. Whip up a batch of these muffins on Sunday and then just reheat and eat. [READ MORE]

Our best granola recipe. It is like a huge flapjack crumbled up to be granola. No fruit granola – just oats, nuts, spices and sweet stuff. [READ MORE]