Nigella may have had made the Coke Ham famous but this version takes it to a different level. The cherry jam & pineapple glaze is sweet, sticky and warming.

Every guest I have ever served this for has asked for seconds (and sometimes thirds). The ham is the showstopper of this menu so 1.2 kilos will serve 4 – 6 people.

For something more traditional, we serve Cherry Coke Ham with potato dauphinoise (or in American, scalloped potatoes, because “dauphinoise” is just too hard to say and spell).

Plan for leftovers because Cherry Coke ham is better on the second day when it has soaked up even more of that juicy, sweet glaze.

Toast a bagel and spread with cream cheese. Top with pulled ham for a delicious sandwich for lunch.

For a quick, hands off supper, we made a macaroni and cheese ready meal and served with a little pulled ham on the side. Oh, so good! 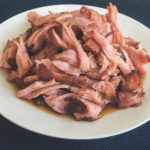 Serve with Cuban black beans, rice and pineapple salsa or with dauphinoise potatoes. See more of our Easter Recipes and Christmas Recipes.
Tried this recipe?Mention @AmericanRecipes.co.uk or tag #AmericanFoodUK