Porridge may have its roots in Scotland but Americans give it a good go. In Minnesota, where there is snow up to your hips for six months of the year, oatmeal is part of the winter survival kit and is a perfect choice for a healthy breakfast. A lot of people ask if American oatmeal is the same as porridge. The answer is a qualified ‘yes’. Americans usually only use rolled oats so pinhead oats and steel cut oats aren’t well understood. We love our porridge as a mix of Scotts Porage Oats and rye flakes. The rye flakes add a nice nutty flavour. 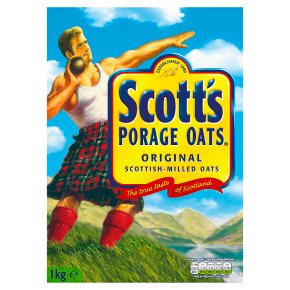 Good porridge takes at least 30 minutes in my opinion.  Instant or microwaved just isn’t as good. Replace milk with any plant-based alternative of your choice. Scale this recipe up according to how many mouths you have to feed in the morning. Grandma Max had a full-time job, worked on the farm and she raised four kids. Porridge for breakfast was a breakfast staple as it is not only cheap to serve a large family but it is also good for you. She had more ways to make porridge than you can possibly imagine! Most of them were in the slow cooker so that it kept warm all morning.

My sister sent me this lovely tea towel with her recipe for oatmeal. If this is more your style, try our baked apple donut or Polish paczki (jam filled donut) recipes. We save the paczki for Fat Tuesday (aka Pancake Day) to celebrate the start of Spring. 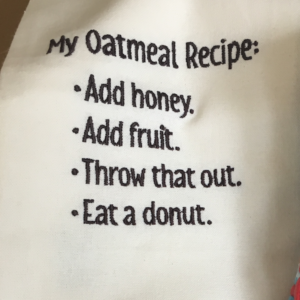 We have five alternatives for porridge so that you don’t get bored during the week.  If you still need more inspiration, try Green Leafy Gael‘s blog of super posh porridge. Vegan chocolate orange, coconut and goji berries and more.

I usually can’t eat right upon waking so I like to pack my porridge in a pretty Thermos and dig in on the train into work.  After standing on the platform in the cold and wet, it is quite a treat. Posh Porridge is my default but on the weekends I love to treat myself to a bowl of Ultimate Porridge. The caramel nuts are just divine.

We also have delicious recipes for Baked Oatmeal. It is an American speciality and every Brit I know wrinkles their nose but then falls in love with our cinnamon roll oatmeal, super easy baked oatmeal cups and our luxury baked blueberry oatmeal.

Porridge Five Ways
Print Recipe
On a frosty morning, nothing beats porridge. It warms you up and keeps you going until lunch. Porridge Five Ways will make every morning a little bit different so that you never get bored of this delicious breakfast staple.

California Quinoa Pancakes, our vegan pancake recipe, is healthy yet still a celebration of Pancake Day. Top with fruit, nuts and a drizzle of syrup. [READ MORE]

American sweet potato casserole with pecan topping is a great side dish for traditional Sunday Roast or as part of a British American Thanksgiving menu. [READ MORE]

For Mother’s Day we are celebrating with some of the fun and less than helpful notes of advice scribbled on our family recipes. Have a giggle and a Happy Mother’s Day!  [READ MORE]